Chihuahuas are little cuties that are made even more adorable when we call them Apple head or Deer head Chihuahuas. What does that mean exactly? chihuahuas are categorized as Smooth coat and Long coat variations, which is the official way that the breed is divided. However, Chihuahuas can be referred to as being either “Deer Head” or “Apple Head,” depending on their appearance and physical characteristics. Both head shapes are found in the Smooth Coat and Long Coat variety. Below are the detailed descriptions of these differences to help you better understand the Chihuahua breed.

What Does ‘Deer Head’ and ‘Apple Head’ Mean?

These terms are used to describe the appearance of our sassy Chihuahuas. Specifically to the shape of their facial structure and muzzle length.

●     Deer Head Chihuahuas – have longer-shaped heads similar to a deer and their muzzle is sloped at the forehead, giving an overall slender appearance.

●     Apple Head Chihuahuas – have a round head shaped like an apple and their muzzle joins the forehead at a sharp angle.

Historically, both the Dear head and Apple head variation of Chihuahuas existed before Europeans discovered the New World, and these little companions were brought to the West. Pre-Columbian artifacts that were discovered in Central America, show the likeness of Chihuahuas with both apple and deer-shaped heads, suggesting this evolution in head shapes occurred quite a while before the western world ever saw them. Theories abound about how the Chihuahua breed came to be. It is believed that they are ancestors of the Mexican breed called the Techichi, belonging to the ancient Toltec people, dated as far back as the 9th century. The Aztecs believed that these little wonders could heal the sick, and predict the future. When an owner passed away, it was believed that they would guide his owner’s spirit into the afterlife. However, there still isn’t a definitive timeline about when the different-shaped heads may have appeared.

Like Disney’s deer character, Bambi, the deer head Chihuahua has facial characteristics that resemble a young deer’s face. Like Bambi, these Chihuahuas have a long muzzle, large ears, and a sloped forehead.

This variety comes in both smooth and long coat varieties, the most common color though, is the fawn shade.

Deer head Chihuahuas seem to be more popular in the general public, than apple heads. Though this variation is not officially recognized by Kennel Clubs.

The cute shape of the apple head Chihuahua is because of its rounded head and small pointed snout. This is considered the breed’s standard in competitions. This variation can also have a smooth coat or a long coat in many different colors or color combinations.

The most distinguishing characteristic of the apple head Chihuahua is its 90-degree sharp angle, where the muzzle meets the forehead, it is also known as the stop. This point of the face forms an “L” shape. They may remind you of a cute children’s cartoon character in their appearance.

Ren & Stimpy –  If the phrase “Happy. Happy. Joy. Joy.” means nothing to you, you are not a child of the ’90s. Who can forget the hyperactive, scrawny, emotionally unstable Chihuahua with sociopathic tendencies called Ren and his dim-witted cat companion, Stimpy? Ren would often be moody and direct his anger issues towards poor ol’ Stimpy in all of their cartoon escapades. Ren had an intense need to control all situations (sound familiar?) Often creating high levels of frustration for himself, then Stimpy would use those famous four words to calm him down.

The Taco Bell Chihuahua – This cutie deer head Chihuahua named Gidget became the face of the American Fast Food chain, Taco Bell in the late ’90s.This ad campaign single-handedly introduced the Chihuahua breed to millions of Americans, some of which, had never even heard of this little sassy breed yet. The catchphrase “Yo Quiero Taco Bell”, became so popular that you could hear it everywhere.  Gidget was in every commercial for the restaurant and also made personal appearances during the Taco Bell events. She would arrive in limousines and be flown first class to all her destinations! Her career spanned 8 years with the Taco Bell company, after which she retired and enjoyed the fruits of her labor.

Chloe the Mama Chihuahua from ‘Beverly Hills Chihuahua’ – Angel is the adorable little white Chihuahua who starred as “Chloe,” in the movie ‘Beverly Hills Chihuahua’. A must-watch movie for all Chihuahua fans! The story behind her rise to stardom is very humble indeed. Angel was abandoned by her previous owners before the movie’s Dog trainer discovered this little spitfire. Not only was she cute, but she was also a wiz at taking training orders and did several tricks throughout the film. What a smart cookie!  Her previous owners really missed out on a precious little Angel.

Papi the Papa Chihuahua from ‘Beverly Hills Chihuahua’ – Rusco, was the other star in Beverly Hills Chihuahua. He is actually a Chihuahua mixed breed. Like his co-star Angel, Rusco was also not loved by anyone. In fact, he was about to be put down at the animal shelter the day that the same dog trainer swooped in and rescued him! Talk about the “American Dream”? To go from death row to ultimate stardom!  Rusco aka Papi also made a name for himself on screen as a Chihuahua with a lot of pizzaz for demonstrating amazing behaviors throughout the movie. Maybe, these two Chihuahuas secretly understood that their lives had changed for the better.

Paris Hilton’s Chihuahua – Tinkerbell – This little apple head Chihuahua’s stardom began when she made regular appearances in the reality show, “The Simple Life”  with her owner, Paris Hilton, and her best friend, Nicole Richie. In 2004, Tinkerbell became hugely famous when Paris released a tell-all book called “The Tinkerbell Hilton Diaries: My Life Tailing Paris Hilton”. Amazingly, Tinkerbell was all over the news shortly after the book was released when she suddenly went missing. Paris Hilton offered an award of $3000 for Tinkerbell’s safe return and thankfully it was successful. She was returned a week later. Safe and hound!

Bruiser Woods from the movie ‘Legally Blonde’ – Who could forget Reese Witherspoon’s character Elle Wood’s in the movie Legally Blonde? You can’t think of her without thinking about her tiny co-star, Bruiser Woods. A deer head Chihuahua, Bruiser Woods, was played by Moonie the little actor. He was a “Gemini Vegetarian” according to Elle, confident, social, and fashionable. 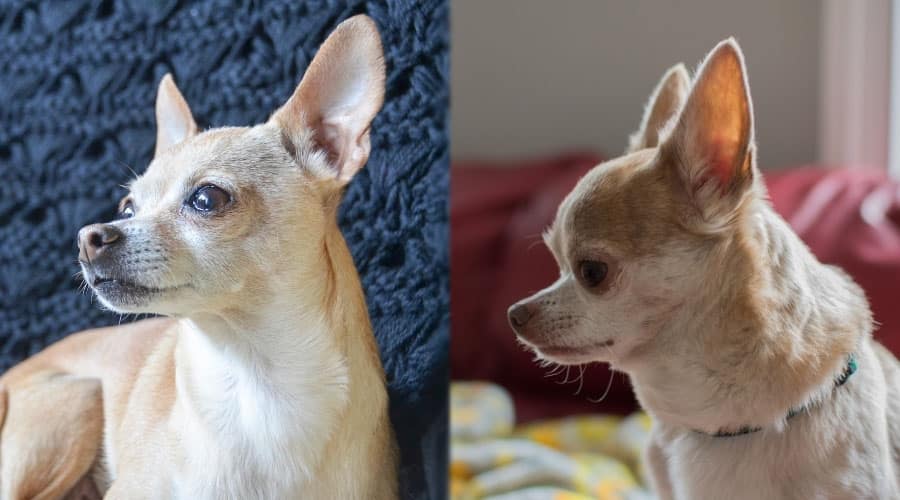 Can Chihuahuas have traits from both apple head and deer head styles?

It is important to understand that the characteristics of both these Chihuahua variations are not locked to any one type of dog. Breeding two apple head Chihuahuas, for example, will result in a litter of apple heads and maybe some deer heads as well. Many times, Chihuahuas can be born with the characteristics of both styles of dogs. A Chihuahua with a perfectly round apple-shaped head may end up with a sloped muzzle and very large ears like its counterpart. Or you may see what appears to be a deer head variety that will also be born with a very short-legged, stocky frame like the apple head.

In all honesty, it truly doesn’t matter which style or variation you choose of this amazing, sassy little breed. If you are not planning to place your Chihuahua in a competition, the deer head variety is an adorable-looking version of this dog. The apple head is also a cute doe-eyed, and expressive variation. What matters most is how much you love your spicy little spitfire and how well you care for and love them. They are fiercely loyal to their owners and your fun-loving Chihuahua companion will give you endless joy for years to come. These tiny pooches have larger-than-life attitudes, they think they can take on the world. So sit back and enjoy the ride!

Why You Need Luxury Dog Products for your Best Friend

What To Do When Buying Dog Products

11 Signs Your Dog Is Sick or in Pain

Do You Like to be Present While Your Pet Goes through Euthanasia?

Dog Clicker Training: How It Works